Back on track: Roller derby skater returns after fight with cancer 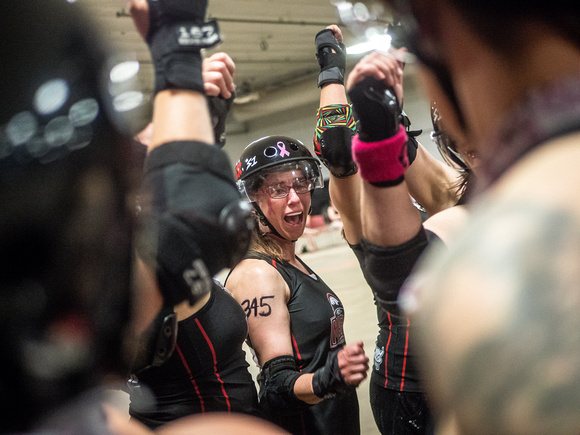 "Nervous, but ready," Said Cat Thisius going into the MedCity Mafia roller derby team's last game of the season. Just over 100 days earlier Thisius had a double mastectomy to remove breast cancer. Over the last few months, Thisius, who also works as the Rainbow School director and an enrichments teacher, has been working toward playing in MedCity Mafia's last bout of the season. Thisius achieved her goal, and helped her team beat the Minnesota Southbound Rollers 266-98. “I got my wish,” she said. “Everything led up to tonight.”

Cat Thisius, who plays for the MedCity Mafia Roller Derby team, huddles with her teammates before their last game of the season against the Minnesota Southbound Rollers Saturday, June 16, 2018, at Graham Arena in Rochester. Thisius played in her first game back with her team Saturday after having surgery to treat breast cancer 103 days earlier, fulfilling her goal to play in the last game of the season. "Nervous, but ready," Thisius said before the game. MedCity Mafia beat the Minnesota Southbound Rollers 266-98.
© Joe Ahlquist
User Agreement
Cancel
Continue