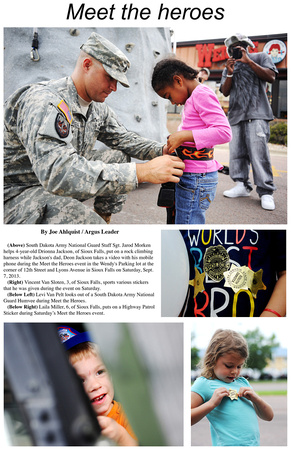 (Above) South Dakota Army National Guard Staff Sgt. Jarod Morken helps 4-year-old Drionna Jackson, of Sioux Falls, put on a rock climbing harness while Jackson's dad, Deon Jackson takes a video with his mobile phone during the Meet the Heroes event in the Wendy's Parking lot at the corner of 12th Street and Lyons Avenue in Sioux Falls on Saturday, Sept. 7, 2013.

(Right) Vincent Van Sloten, 3, of Sioux Falls, sports various stickers that he was given during the event on Saturday.

(Below Left) Levi Van Pelt looks out of a South Dakota Army National Guard Humvee during Meet the Heroes.