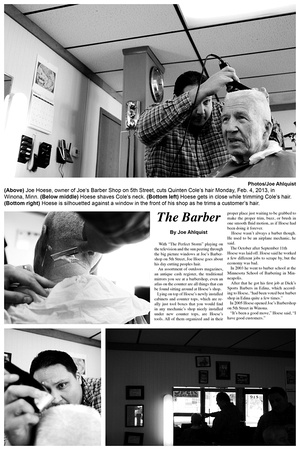 (Above) Joe Hoese, owner of Joe’s Barber Shop on 5th Street, cuts Quinten Cole’s hair Monday, Feb. 4, 2013, in Winona, Minn. (Below middle) Hoese shaves Cole’s neck. (Bottom left) Hoese gets in close while trimming Cole’s hair. (Bottom right) Hoese is silhouetted against a window in the front of his shop as he trims a customer’s hair.

With “The Perfect Storm” playing on the television and the sun peering through the big picture windows at Joe’s Barbershop on 5th Street, Joe Hoese goes about his day cutting peoples hair.
An assortment of outdoors magazines, an antique cash register, the traditional mirrors you see at a barbershop, even an atlas on the counter are all things that can be found sitting around at Hoese’s shop.

Lying on top of Hoese’s newly installed cabinets and counter tops, which are really just tool boxes that you would find in any mechanic’s shop nicely installed under new counter tops, are Hoese’s tools. All of them organized and in their proper place just waiting to be grabbed to make the proper trim, buzz, or brush in one smooth fluid motion, as if Hoese had been doing it forever.

Hoese wasn’t always a barber though. He used to be an airplane mechanic, he said.

The October after September 11th Hoese was laid off. Hoese said he worked a few different jobs to scrape by, but the economy was bad.

In 2003 he went to barber school at the Minnesota School of Barbering in Minneapolis.

After that he got his first job at Dick’s Sports Barbers in Edina, which according to Hoese, “had been voted best barber shop in Edina quite a few times.”

In 2005 Hoese opened Joe’s Barbershop on 5th Street in Winona.